Myths and legends of old are stories that were created at some point in time, whether they contain a kernel of truth or not. They are usually intended to convey some moral or life lesson to the audience. Be loyal to your king. Respect nature. Don’t cry wolf. Stuff like that. 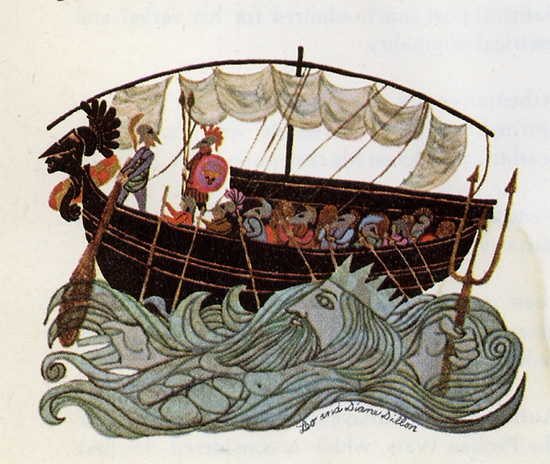 Jason and the Argonauts are basically the Avengers (picture source)

I know I’m not the first one to state this, but comic book heroes are our modern-day mythology.

Special mention here goes to Dan Hassler-Forest, who has just about built his academic career out of showing how comic book heroes (and pop culture in general) are not only a pinnacle of transmediality, but also by showing us how they affect and are influenced by our society.

See, the superhero franchises now span all kinds of media. These media are all contributing to the mythos of their subject, whether this is Batman, Spider-Man or Captain America. With every iteration (assuming it is considered canonical), the superhero gains a new character trait or a bit of backstory, or at the very least another adventure they survived.

I should note here that although comics is one type of medium, most comic book series have featured more than one writer. Each writer contributes to the character stories in their own way, using their own beliefs, and playing their own strengths. The accumulated result becomes the canon.

But it’s easy to notice that these adaptions have become more than cross-media. They have become transmedia; using more than one medium to tell one story.

An illustrative example for my case is Harley Quinn.

The character of Harley Quinn is one of the most cherished villains in the world of Batman, and is considered a complex, morally grey character. But Harley Quinn’s origins do not lie in comic books.

For Batman: The Animated Series, the writers needed to have a female sidekick for Batman’s nemesis the Joker, to be used for one gag in the episode ‘Joker’s Favor’. The show didn’t even end up using her for that particular gag, yet her appearance in the episode made a lasting impression. From there, she finally made her way to the comic books. These days, she is a fan-favourite, appearing in games and movies based on the Batman comics, and earning herself main character status in a couple of comic book series. For a more comprehensive history of the creation and evolution of the character, follow this link.

Harley Quinn is a great example of how a medium can add to the story from the original medium, prompting a transmedial construct.

I think there’s a case to be made for the Marvel comics and the Marvel Cinematic Universe as well, and see how the movies, mostly based on the Ultimate comic series, feed back into the ‘regular’ comic book series. But I don’t want to use this article to prove how comic books are transmedial. Others are probably far more adept at achieving that.

Phil Coulson was created for the MCU, but has surfaced in the comics for all-new adventures.

My conclusion so far: the stories of comic book heroes are comprised from comics, movies, and TV-shows. And now, I want to figure out where games fit into the equation.

Comic book game stories are usually derivatives of repeating conflicts in the comic. Gang wars, Doctor Doom teaming up with Loki to take over the world (LEGO Marvel Heroes, Marvel Heroes Omega), the Joker jail-breaking Arkham inmates; fairly familiar stories within the established worlds. They hardly manage to present an original spin on these cookie-cutter stories and the outcome is mostly the same every time: the hero wins, the bad guys are arrested, banished or (in rare cases) destroyed. 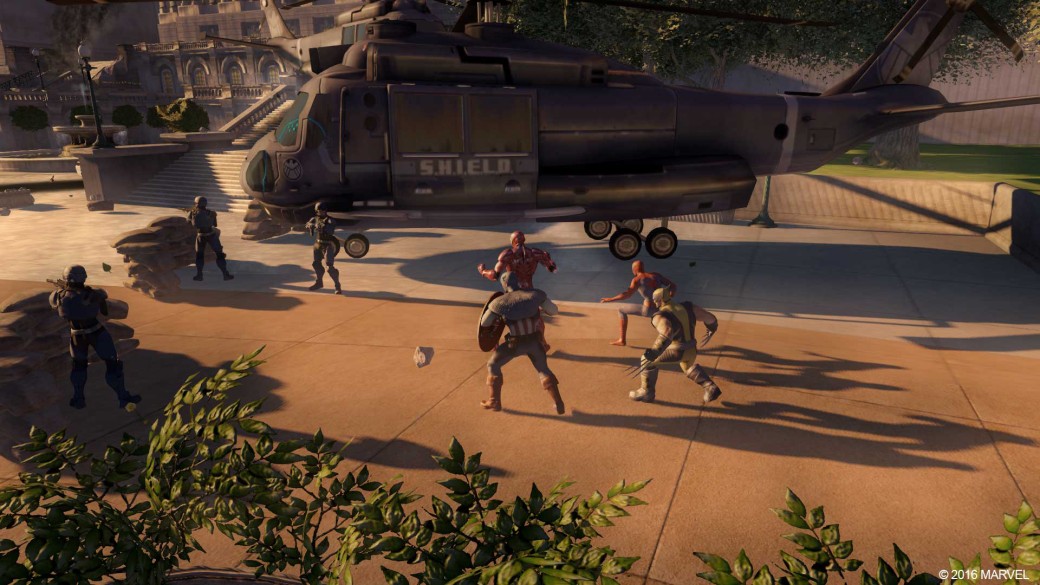 Marvel Ultimate Alliance 2 (screenshot from the updated Steam version) was a close adaptation of the Civil War storyline, yielding no surprises.

Now, I am sounding a lot harsher than I intend. I know no game studio, never mind a game writer, sets out to create a bland story. I am also completely unaware of any politics going on behind the scenes. It’s not impossible to imagine any comic book publisher wanting to push the sales of their printed property, and for that to happen, the games should never outshine the originals.

On the other hand, it’s not unheard of. And it should be noted that a successful transmedia product will definitely increase sales and awareness of the source material.

A good example seems to be The Walking Dead, between the comics, TV show, and the games. The Telltale games do seem to offer extra glimpses into the story world of The Walking Dead, filling in gaps in between events or exposing more of a character’s background. Of course, you’d have to wonder how much of The Walking Dead‘s audience is aware that the franchise stems from comics. In terms of brand recognition, the TV-show seems a lot more popular than the comics.

Being the one making the tough decisions ought to add to the experienced tension as well.

Are games not bold enough to introduce new characters or pivotal moments to the accumulated story of their (super)heroes? Or are they trying, but is the audience refusing to accept them? I recall Spider-Man: Web of Shadow trying a few daring roads by infecting a menagerie of heroes and villains with the Venom symbiote. But since the game allows the player to choose how to neutralise each opponent (violently or not), it’s easy to dismiss the game’s plot as non-canonical. In fact, it’s practically impossible not to do so. These characters are still alive and kicking in the comics.

Imagine this: wouldn’t it be nice to experience a game solely about, say, The Superior Spider-Man arch? Executed properly, it could offer a glimpse into the day-to-day routine of that Spider-Man incarnation and (I’m trying to avoid spoilers here) ramifications of that particular take on the character. Such an approach results in additional content to the existing story-world, yet you can still introduce the premise and ending as featured in the original comics. Since the player will be the ones performing the actions, you can play with the notions of responsibility, moral conflict, and guilt. It’s a meaningful way to add to the canon. To validate games as part of the transmedia strategy.

It’s hard to say where the future takes us. There are a few comic book games still in development at the time of writing. I’m hoping they dare to go out on a limb and add to, not repeat, the stories of their characters. As a final remark I’d like to point out that Insomniac Games’s Spider-Man set to release in 2018 looks pretty promising. The trailers indicate that at least one non-famous villain is going to play a major role in the game. Let’s hope that this marks a shift in how games finally begin to own the story worlds of the comic book heroes.